As explained in a previous post, Sturuss has gone on holiday for a few days over the New Year’s break, back to the village we used to live in for quite a few years. Actually, it’s not much of a holiday, as instead of having a herd of Icelandic mares and a yearling gelding to boss about and generally at least feeling important, with the freedom to wander into a warm stable or out to a cool yard at will for a roll, he’s shut in a 9 square metre barred loose box with a view of giants (= regular riding horses) on their treadmill, with only a bit of time each day out on the sand manège for a roll and a trot round. His carer has taken pity on him and is providing a constant stream of apples, carrots and brushing to make up for it and it’s only until Monday, so…

Of course, this was a great opportunity to go out for a walk around the village and take in some of the old sights and to escape the nightmare of that dreaded treadmill for a couple of hours! (Whoever thought of treadmills for horses should not be allowed to keep horses at all, in my view – they should get themselves a motorbike… :() Neatly brushed, with the worst of the sand removed and hoofs properly picked out, we were ready.

We set off, then, along the banks of the familiar village stream – one of the houses we used to live in backed on to it and always provided hours of fun for the girls and the dogs. Past  the plant nursery – the owner of the nursery used to keep his horse in the same stable as Sturuss, but he wasn’t about just now. We continued alongside a small field that used to house a nervous little herd of sheep whose bells jangled as they charged shyly away from any passersby and past a small orchard where a very pretty black mare used to live: Sturuss would always whinny over to her when he was grazing on our little patch of apple trees! As we turned in to that little road, he called very loudly in the direction of his old stable a little further down the road where he often used to get a treat of banana, one of his favourites, but although I let him have a nibble of his grassy patch, now featuring only one and a half dead-looking trees and boughs, we weren’t going quite that far west, but turned into the village to see some more familiar places.

I noticed that Sturuss was really alert all the way and am convinced he not only knew where we were but also exactly where we were going – I had a fine time keeping up! We know all the houses and most of the people along the way – a farmer here, a friend over there, a new saddler in a converted barn, the wrought-iron craftsman’s smithy, the village shop… Because we know all the back ways and shortcuts, we turned back towards the stream and followed it down through the back of the village, which takes you into a dip past the old sawmill. It was amusing to see the car drivers’ faces as they passed us on the road: some knew us and waved, others just grinned, but I suppose the sight of very furry Haflinger pony with a somewhat rotund middle-aged woman chugging along purposefully is a bit of a sight!

From the old sawmill, you look up to the oldest part of the village on the left and the schoolhouse on the right. On the right-hand side of the primary school, which was originally built in the 16th century as a country residence, is the “Trotte”, a mediaeval stone barn built onto Roman ruins and now a popular cultural venue. Because this is Pfyn, latin Ad Fines, the end of the way – well, the Roman world, at the border between Rhatia and Gaul just before it hits Lake Constance. This is one reason why Pfyn is fairly well documented and very proud of its history, though this was the second time it surfaced – years ago, a big archaelogical dig discovered the Pfyner Kultur of about 3700 years ago to the west of the village and after a further dig in 2002,  in 2007 Swiss TV spent part of a summer re-enacting life at the time of the lake-dwellers, much to the delight of the excited villagers all vying to get onto national telly.

It’s quite clear from the layout that the “Städtli” (= little town) was a mediaeval settlement – it had market rights and a typically Swiss layout: a long, almost lozenge-shape, oval with houses crowded along the edges, a church at one end and gardens spilling down the slope of the small hill it was built on. There are no longer any town walls, there are only about 10 of the closely packed, higgledy-piggledy houses left, and the centre of it is a small park, so that the oecumenical church at one end, with it’s walled cemetary, does rather dominate, with the “Schlössli” (= little castle) schoolhouse at the other, the Trotte and a very cleverly built modern extension, fitted into the steep slope and mimicking the shape of the Städtli… best seen in an aerial view here: http://www.archaeologie.tg.ch/documents/Adfines.pdf. Pfyn’s success as a market town didn’t last and today the whole village has only a couple of thousand inhabitants at the very most, including all the outlying farms and hamlets, oh, and a chocolate factory!

This time, we didn’t go up through the Städtli, but just admired it from below and turned once again along the stream and through one of the newer quarters of the family-oriented village, towards woods that Sturuss knows only too well – he does love to see what’s going on when he’s out and about! In fact, he was so thrilled to be back and so impatient to get on that he was walking along with his neck stretched out sniffing the ground ahead, obviously taking in the old sights and sounds. He knew where we were going – well, he thought he did, and stopped outside a good friend’s house… she used to come jogging with us and he seemed to enjoy trotting along behind her, following her bright orange jacket along the farm and woodland tracks! Only she doesn’t live there any more and while I was imparting this information to him, he was a bit too quick off the mark and – stamp! – I didn’t quite have time to pull my foot out from under 400 kg of enthusiastic pony… 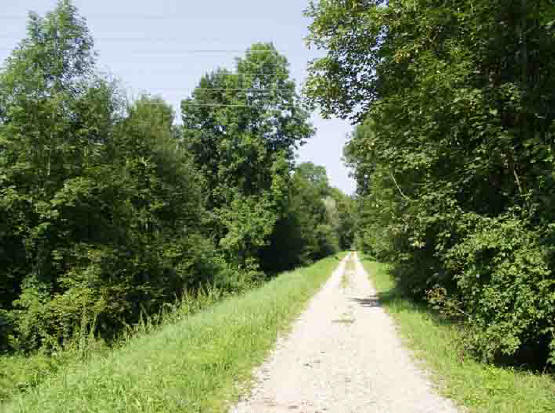 Well, nothing’s broken and I was still able to hobble along to where my friend has moved to, so Sturuss did get his carrots and banana, after all, along with a big fuss, which he clearly appreciated! In fact, he literally ran circles around us to prove that he’s nothing like, ahem, old, but just raring to go. The way home took us along the old Roman road, past the show-jumping stables, past the post-office and bank, past the carpenter’s workshop and woodyard, the old dairy, all at a rapid walk and almost screeching around the corner back to temporary quarters and the peace of the stream again.

No wonder: his bucket was full of lunch, his loose box full of fresh hay and well, no time to lose….