I arrived at the stables this morning to find Sturuss happily munching hay in his new quarters. Since there have been some comings and goings in the livery population, it’s been necessary to divide the larger yard area into two, with one big open box and outside area for Sturuss and the other kept free for ponies and horses who are visiting or who come for training purposes. And not to worry, he won’t be lonely – in the back wall, the single door has been turned into a Dutch door with the top permanently open to the large indoor stable where the six Icelandic mares hang out, so there’s constant female company as they pop their heads over to say hello and have a nibble! This arrangement is perfect for our present situation, giving Sturuss the peace and quiet he needs to eat his hay and feeds but with plenty of horsy contact. Of course, this arrangement is only for nights or in bad weather, as there are plenty of paddocks to run around in and then it’s a dream – Sturuss and his harem!

The weather has finally turned quite cold, with some frost hanging in the bushes closer to the ground. This was a good excuse for an energetic brushing from me to get warmed up before today’s ride, but Sturuss also seemed rather perky… To my surprise, we set off at a lively walk and he even offered to trot across the road rather than expecting traffic to stop in his honour, and we headed up towards the woods. Sadly, even in Switzerland there is some occasional illegal dumping, this time a large white plastic sack full of flattened plastic water bottles strewn around. Eeek! What’s that?! (said Sturuss), arching his neck and side-stepping slightly. As if in slow motion, he came to a halt. Ewww… something that will JUMP UP AND EAT ME…..aaaarrgghh….. and he whipped round, prepared to race, hell for leather, home. 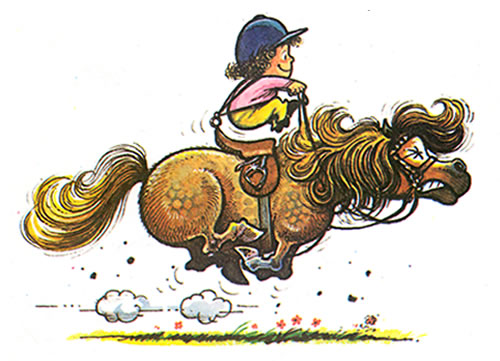 Only I stopped him. He didn’t much like having his little hissy fit interrupted, so to my utter amazement, began to buck…!! Fortunately, he is nearly 28 and I’ve been the one in the saddle for nearly 25 years (plus I’m fairly heavy!) so I wasn’t going anywhere and he soon gave up 🙂 My, my, there’s plenty of life in him, yet (I thought), and with a little cajoling, we were soon past the monsters and enjoying the bare branched winter forest and tripping neatly over the scattered greenery from last week’s storm. On the edge of the woodland, several trees had succumbed, branches harshly ripped from the main trunks and lying broken on the ground and the last bit of lush greenery we had around the holidays has given way to dry, barren looking sticks and a rather monochrome landscape with the addition of some pretty gloomy fog.

As we turned for home, there was still a good deal of power in Sturuss’ stride as his pace picked up a little, and then a little more. Within seconds, it was feeling tremendously bouncy and I was having a job stopping him from running into an excited trot – or even a canter, and we bounced all the way home at the most active walk I think I have ever experienced, a dancing jog that had me chuckling to myself the whole way.

When we got in, I cornered our stable mistress. “You’ve told me about all the fancy foods you’ve been feeding Sturuss, “Best Years” müesli, maize cubes, thistle oil, pony nuts and pressed hay, mash and carrots, not forgetting bread and banana treats… BUT YOU DIDN’T TELL ME YOU’D FED HIM ON RUBBER BOUNCY BALLS!!!”

You should have seen her face!