This week, we had a rather more unusual destination north of the border. Business took us to Mannheim on the Rhine/Neckar rivers for a couple of days. Not terribly far from where I was born, it’s not a place I’d been to before, certainly not that I remember. A relatively small university town in Germany, its population is actually nearer that of our largest Swiss city, Zurich. Its location on the meeting point of three provinces and where the rivers meet, too, meant that we were quite curious to see it. Unusually in Europe, the centre of town was built on a grid system as early as the 17th century – apparently so that everyone would have a view of the palace, which, we’re told, is the second largest Baroque palace (presumably after Versailles). 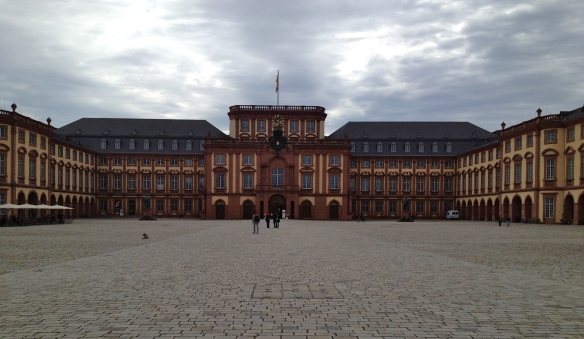 Sadly, the weather wasn’t playing along too well in the short time we had to explore the town and we didn’t get to go and look at the Luisenpark, which we heard has lovely gardens and other attractions. Instead, we did have a wander through the small park at the Friedrichsplatz with the large Wasserturm, which was much more cheerful with its spring plantings of colourful tulips, daffodils and violas than the heavy grey skies.

With the university and important businesses being  based in Mannheim, it’s a surprisingly international place and we heard many different languages – and almost no local dialect in our two days there! Apart from the historical parts of town and the parks, the city comes across as fairly ordinary so one of the last things we expected was to find ourselves greatly enjoying two wonderful meals. Our rather run-of-the-mill hotel with somewhat helpless receptionists initially left us a little frustrated and feeling that we were having to settle for the hotel restaurant – which turned out to be extremely high class and utterly delicious! Thwarted by the weather on day 2, we accepted a recommendation to a restaurant at the top of a department store and again, wow! One of the best meals we’ve ever had – and we are truly spoilt with gourmet restaurants in Switzerland.

So a lasting memory of Mannheim, as we waited for our Inter-City Express train in a rather grimy lounge, was the unexpectedly exquisite food, from beautifully composed salads, duck and fish to exquisite oysters, pata negra, lobster and guinea fowl and finished by a touch of panna cotta with rose syrup, strawberries and rhubarb… sigh! The touch of Champagne was rather good, too :).

Perhaps next time the sun will be kinder to us and we will get to appreciate more of the sights – certainly, the food could tempt us…

Ah well, back to the grindstone – though with the view above from my window, sunshine and temperatures at home due to go up to 26°C today and tomorrow, I have little call for complaint. 🙂

4 thoughts on “Somewhere else”