We had a great aunt who was very frugal and also extremely sensible, and who had spent some of her youth as a “ladies’ companion” in England. Gift-giving occasions brought vouchers or free publications from the banks she frequented, such as  a bird-watching guide or a series of short fairy-tales, or occasionally something she had been given and had no use for – there was always thought involved, but her purse was limited and therefore, it was often interesting to see what she would come up with next… In about 1998, pre-internet of course, our middle daughter (MD) received a brand new paperback book for Christmas from Great Aunt Marion. We had only vaguely heard that there was a popular book by a young author about a boy wizard doing the rounds, and here it was. At this point, although our daughter spoke and understood basic English and I’d read a few stories to her (memorably, Green Smoke by Rosemary Manning, which I myself had enjoyed around the same age of 8 or 9), there was certainly no question that she would be able to read a book in English herself…

A busy mum with another younger daughter (about 2 or 3 at the time) and a young teenager, it wasn’t all that easy to find some time to sit down and actually read to MD, but after a few months, we got started… and were immediately hooked! The teen didn’t pay much attention and the baby dozed, but as I read, MD and my husband both listened with ears agape as the story unfolded. What a delightfully British mix of boarding school story and Narnia, shades of the Worst Witch and Lord of the Rings – there was something for everyone in this story of the newly discovered 11 year old wizard, Harry Potter!

My daughter was obviously particularly caught up with this imaginative tale – before I knew it, she had picked the book up herself and actually began to read in English, stumbling over words she’d never heard of, asking how things were pronounced and generally showing a good deal of stamina for someone who, according to the Swiss school system, hadn’t even learnt to read at all until she was 7! Compared with German, English is very illogical and difficult to read, with a lot of special rules, and I was truly amazed that she stuck it out! She promptly received the second and third books in the series for Christmas, thanks to her Granny and Great-Granny, and we spent a couple of rainy holidays reading these – it had to be holiday time, because I was required to read them out loud and my husband couldn’t miss any of the story! And once again, MD picked them up and read them herself and read them, and read them and read them…

As you may know, by this time, Harry Potter fever was high and there was huge excitement when, each summer, a new story came out. For several years in a row, we waited impatiently for the release date to come round and for our book to be delivered in time to take to Brittany, which had become our standard destination for the family “reading”. One year, MD was staying with friends in France and couldn’t resist buying her own copy and reading it before we even all got together – but she still enjoyed my reading it out to them (she was about 14 by now!). Another year we scoured French bookshops and finally, in desperation, a supermarket, to find the newly released book as soon as possible – so popular it was sold in English, as well as in translation, within the shortest space of time.

By the time the last book came out, MD was already a young adult (she’s almost Harry’s age :)) and the reading out loud had fallen by the wayside somewhat – we always joked that I should have recorded myself, as my husband often fell asleep and missed parts of the story, but he also took over the cooking while I read and he and my daughter would insist I keep reading as they fed me morsels of lunch and cups of tea LOL!

I’m sure MD will agree that Harry Potter and the seven stories by J.K. Rowling about him were highly influential for her as a teenager, both in themselves and their morals, but also in guiding her further reading. The result of reading these books and the motivation for further reading (she pretty much went straight on to Lord of the Rings…) have given MD the most incredible vocabulary and style in English, something so remarkable that her command of the language is often commented upon – few youngsters manage to avoid modern slang and sloppy language as she was able to, so that she expresses herself quite unusually for a young woman, and with hardly any accent, either!

That this doesn’t necessarily work for everyone is apparent in our own family – my eldest daughter also speaks excellent English with a good and extensive vocabulary and little accent, but not quite like her sister (she was a bit old for the Harry Potter craze and later grudgingly read the books, but not with quite the same enthusiasm, though she did once read one in French, curious about the translation!). My youngest daughter refused to even acknowledge English at all until they learnt it at school (from age 12), and although they read Harry Potter in German in class when they were about 10, she was never interested in reading any of the others, and certainly not in English… but then, why would she, when the movie world had rapidly caught up?! 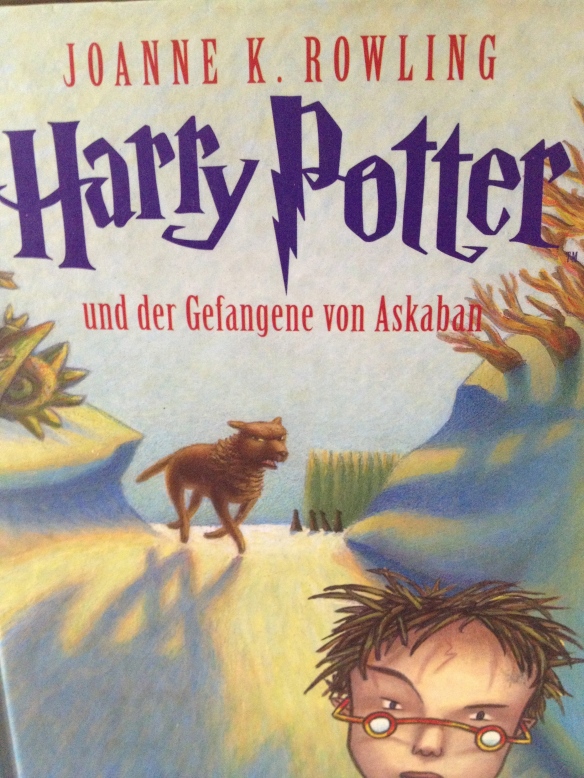 All of the films generated a similar pre-release fever as the books had – where the films were concerned, the audiences were far greater and we joined in, too. The whole family was likely to be in the local premiere of the latest Harry Potter movie, wherever we happened to be (they showed the films in English, even in a small town in Brittany!), so for 15 years, Harry Potter has accompanied our children and ourselves in some form, really quite an era!

And so it was that when I spotted Harry Potter wool a few years ago (!!), I couldn’t resist buying a skein of each colourway and seeing what would emerge. It was a bit like magic, as Opal had produced these yarns in self-striping colourways, naming each after one or more of the characters in the films. I believe there were 8 in all: Harry Potter, Harry and Ron, Hedwig, Dumbledore, Draco, Lupin, Tonks and Ron (I wonder why Hermione didn’t make it to the shortlist?!). As it turned out, I was a little over-ambitious and soon realised that these were yarns for “plain vanilla” socks and not for any kind of pattern, and after a few pairs, I put the rest of the yarn in my (mothproof!) stash. 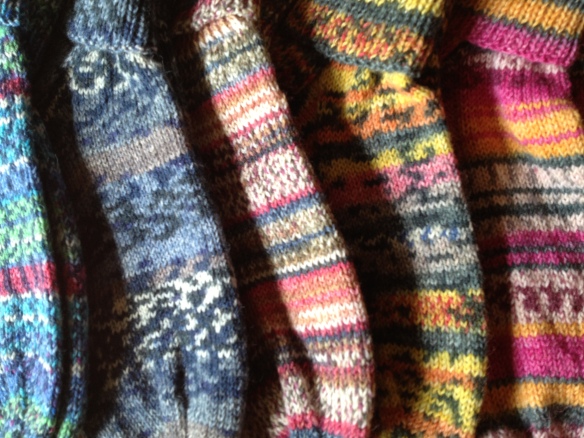 Fast forward to a couple of months ago, when I was tidying up and trying to eliminate some of my stash – there were six balls of Harry Potter self-striping sock yarn, waiting patiently to be knit up. I declared that this would officially be the end of the Harry Potter era and that I would make up all six colourways into some useful socks and therefore proclaim that it was over for this family!! Even if our grandchildren and great-grandchildren read and enjoy the books or watch the films, they will never experience the anticipation and thrill of each new story being published or each new movie being screened (often late at night!) and so, for us, that’s it. 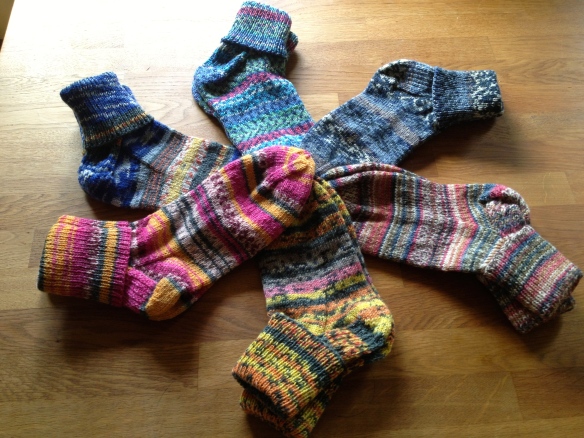 clockwise from the left: Tonks (pink!), Harry and Ron, Harry Potter, Draco, Dumbledore and Lupin, all yarn by Opal.

Obviously, two pairs of these socks will be winging their way to England to MD and her husband – “Harry and Ron” and “Lupin” are in the post…!!!

* Did you know which spell Rictusempra is? It’s the tickling spell 🙂

11 thoughts on “Rictusempra – the End of an Era”