It’s a funny-looking name for a place, isn’t it?! Probably seems like gobbledygook or double-dutch, even more so when you hear the local language – almost unintelligible to most other Swiss German speakers, a real mountain slang or patois.

The village itself is part of Appenzell – see A! – but lies a little higher up on the road to and  in the direction of the Säntis mountain which either towers over or otherwise forms a backdrop to most of the eastern cantons.

A pretty village typical of Appenzell Ausserrhoden (the Protestant outer ring canton that surrounds Catholic Appenzell Innerrhoden), it consists of a central core of those neutrally-coloured houses with the long bands of windows and panels – supposedly always in creams and beiges in AR, pastel blues and greens and blood reds or mustard yellows being the preferred colour scheme in AI – lined up around the church, plus the usual scattering of farms over the surrounding hillside that seems as if blocks had been spilled out of a child’s toybox. Like most small communities here, it features a good infra-structure: post, bank, dairy, butcher, baker (and probably a candlestick maker!), grocer, schools, garages, restaurants, electrician, carpenter, hairdresser, doctors, vet… and any number of others. This is unusual in the ROW (rest of the world!) these days, but I can assure you that here it’s pretty standard – you rarely need to leave a village unless you really want to, and local businesses are fiercely protected and patronised, to the point where locals will happily pay a higher price and defend the necessity to do so in order to keep up the old ways, a very endearing trait. (Perhaps one of the reasons that the Swiss can be a bit funny about “foreigners” and their willingness to abandon all social advantages of this infra-structure for a “good deal” elsewhere!) 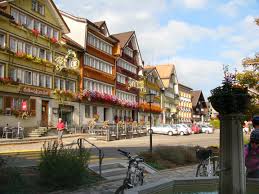 Of course, for the tourist there are a number of attractions, quite apart from the beautiful local landscape for hiking, biking, cross-country skiing or snow-shoeing or using that little red train from Appenzell that turns a corner in Urnäsch to travel on to Herisau, or taking the post bus up to the Säntis or one of the holiday homes for some more hiking or skiing or other outdoor sports – or even just to sit over a drink and admire the view. Urnäsch has a museum of local culture and tradition that is in a quaint old house (unpainted!) just off the central square and showcases many aspects of country life in the region. This includes courses in how to yodel, how to swing a coin in an earthen bowl or how to ring a cowbell, all popular old-fashioned pastimes. Here, you’ll also hear the local zither music or a local band – usually a zither, a fiddle and a double bass.

But that for which Urnäsch and the surrounding area of (Protestant) Ausserrhoden is probably most famous is something the locals do for themselves and not for the tourists – proved by the fact that although they also do it in the middle of the village, they also go off around all the outlying farms… I’m talking about the Silvesterchläuse. “Silvester” is New Year’s Eve, the feast day of Silvester I, a Catholic (!) pope and saint, and in the course of the religious struggle of the 16th century* this tradition was celebrated according to the old calender, in brief, today it is celebrated twice – once on December 31st and once on January 13th and does more than just let in the New Year: groups (Schuppel) of costumed men circulate through the area, stopping off at each house to sing a beautiful, haunting yodel (have a look and listen here: https://www.youtube.com/watch?v=ainFfnylLho). There are basically three types of “Chläuse” (from the name “Klaus” from “Niklaus”/Nicholas):

– the “wüeschte”, the ugly ones, are dressed like frightful monsters

These two types will usually be carrying or wearing the big, clanking cowbells, the “Schelli”, while

– the “schöne” are dressed in the traditional women’s costume or a velvet suit and a feminine mask, often with an amazing headdress portraying one of the local crafts (they spend a whole year making these!), and they generally wear the round bells that jingle, the “Rollewiiber”, though some will wear a Schelli. (In fact, girls are only allowed to take part in the children’s version of this tradition!)

People do gather in the villages and hamlets to watch and listen to the Chläuse, stamping cold feet and rubbing chilled hands and later retreating to the local inns for hot drinks. The Chläuse themselves begin their tour before dawn and expect refreshments at every house – due to their costumes, they drink through straws and the “refreshment” is generally a home-made schnaps or something similar, so that they can be quite merry as they walk jauntily from farm to farm with their heavy bells, hands in pockets (a very Appenzell stance), ready for the next yodel which presumably is considered a way of keeping bad spirits from the homestead for the following year, as well as encouraging productivity – it certainly promotes community! It will come as no surprise that these tours are finished by lunchtime – perhaps they need till next year to recover… 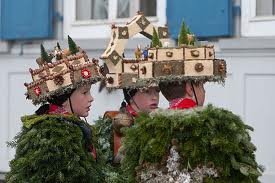 *Around Urnäsch and Waldstatt, “old Silvester” is a remnant of confident rebellion against  Gregorian calendar reform introduced in 1584 in this region, and resulting in quite a tussle – the Urnäsch Silvesterchläuse still carry out their traditions on January 13th as an independent protest by part of the population which did not appreciate having its feast days dictated by anybody else! By this time, the Julian calendar (introduced in 46 BC) had limped behind “real” time by 10 days and a correction was necessary by introducing the Gregorian calendar.

3 thoughts on “U for Urnäsch”