How many bunnies can you count?!

It’s definitely springing out there, and I’ve fetched some of it indoors

It’s taken me long enough, but I have finally finished a few things, so a new month seems a good time to show them.

Firstly, spring socks in Jawoll Magic – very cheering (and they matched my magazine)! 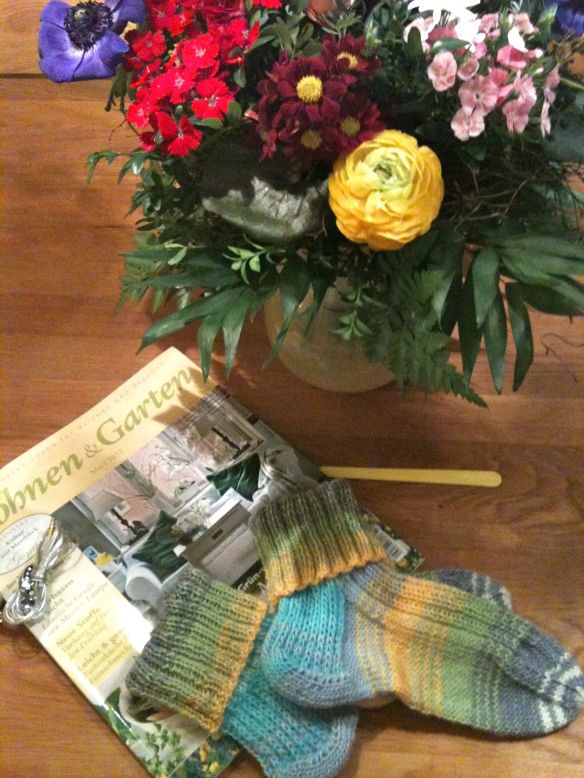 Ysolda is an amazing young Scottish designer whose mind seems to work in mysterious ways, since her projects very often present new and challenging methods of construction that I see nowhere else. These slippers, for instance, begin with the i-cord edging and incorporate the final button loop, then stitches are picked up and knit downwards, using short-row technique for shaping, then a plain garter sole that is Kitchenered – et voilà! Very quick and easy (once you know how, for goodness sake REALLY read the instructions!), next time I would go down from 6mm to 5mm needles for a tighter finish in whichever size I use; these will be lovely and warm but I think the tension is a bit too loose, even with a chunky wool (the four lace holes along the front scoop are intentional!).

The highlight of my FOs has been a special birthday present for my friend, who asked for the very popular Central Park Hoodie design by Heather Lodinsky, a 2006 Knitscene pattern – and according to Ravelry, nearly 4500 people have made this so far. I was one of them a couple of years ago, but mine turned out too big and too warm (!) so I frogged it. This time round, I had the pleasure of using Lana Grossa Cardato, which is mainly merino but also alpaca and cashmere. Chocolate was one of the colours suggested so I went with this very slightly heathered chocolate brown for a really nice, snug hoodie that turned out an absolute perfect fit – for which I am exceedingly grateful, especially after it took me so long to finish!

I was very pleased how neatly the sleeves fitted in:

The original pattern doesn’t have any fastening, just a suggestion for optional crocheted button loops, but a zip was requested here, so that was what I did – another first!

I apologise for the poor quality of the photos – I have yet to dig my camera out from among my teenage daughter’s possessions so am having to rely on iphone photos!!

Well. There is a fantastic storm going on over here with the wind whistling through the shutters and slamming them into the façade, which is making me think of the Whomping Willow in Harry Potter – whomping shutters?! At least the neighbour has finally taken down the two flagpoles in his garden, one of which was threatening to fall onto our house as it bent, swayed and weaved in the wind. I’m sure one isn’t supposed to leave national flags out to be beaten to shreds by wind storms and rain!

Wouldn’t you rather be here with me?!

I like to try and remember the other rooms in the house at this time of year, especially when a typically enormous pre-Christmas workload comes in with the pressures of a deadline… So the office usually gets some sort of decoration, too

It only takes the addition of a candle or two and an accompanying cup of tea with a Christmas biscuit (thanks to eldest daughter!) to improve the working woman’s lot, so I really can’t complain, can I?! Especially when it’s raining and storming outside, brrr.

Well, today was a first!

Not only did I decide to go with a fake tree, but I actually put it up this early in the month – my family will be shocked 😮 At the end of the day, it’s all about simplifying, so that for one thing, I know the lovely real trees we have always had dry out incredibly quickly and leave most of their needles behind when I take them down on January 6th, and it does seem wicked to have a cut tree just for a few days. The live tree we bought last year suffered over the difficult summer and is recovering quietly in a corner for a few years, when it will be simply too large to bring inside! And my parents will not be here for Christmas, so we’ll be having our little get-togethers this weekend and next, and it would be nice for it to feel seasonal…

SO… a teeny, tiny fake tree, but with most of our favourite things collected over the years displayed on it, and the addition of a few lights – nothing short of revolutionary in this house!!!

Well now, doesn’t time fly when you’re…busy?! And hey presto, the 1st Advent Sunday has  been and gone, setting us up for the holiday season – though it’s one of those things where the journey is what it’s all about, the getting there really has more going for it than the quick couple of days of actual celebration. It’s a good reminder to heed, to change down a gear, enjoy what is getting on for the dead of winter, a feeling of anticipation – what for? – a time to encourage even more family get-togethers!

Like having a bit of a dream, enjoying a bit of sunshine, the smell of evergreens, some knitting, a cup of tea, an interesting book, a good sleep, some leisurely baking…! I can’t complain, as I do get to do all of these things, albeit inbetween driving here, there and everywhere, lugging bags of shopping, wearing my eyes out on the computer, staying up too late to watch a great series on DVD (what off button?!) and racking my brains for words in various languages where no thesaurus will ever quite do the job. 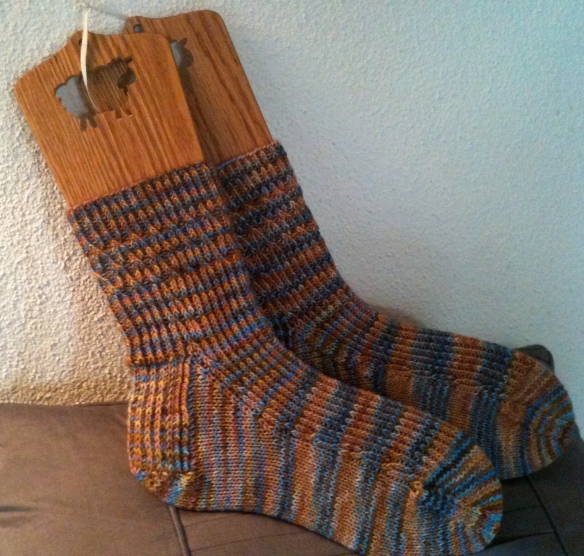 Twisted Diamond socks by Ann Budd from Sockupied, made up in Madelinetosh Sock Yarn in the colourway “Home”.

I adore these socks. In fact, I adore the yarn, Madelinetosh being my favourite sock yarn so far. This particular colour, which was hard to photograph, includes a bit more golden-pink than is obvious, and along with the crisp blues and golden brown-yellows, is very well named, “Home”, and I think it’s gorgeous, lots of favourites in there, but the combination is stunning. They were easy to knit, too, in the twisted rib with just a few simple cable crossings to deal with and remembering to keep that up along the foot… it completely escaped my notice that I was also supposed to do cables down the side of the heel, I was so absorbed and things were running along so smoothly. Never mind. Really, quite delightful. And adorning my tootsies as we speak.

And there was more, too. My friend asked for a hooded scarf, so a fair amount of brain power went into working out a pattern, with prototypes for my grandkids and then, tada, the final result in adult form 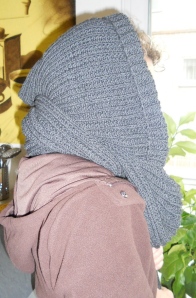 She loves it and is considering making another herself for her daughter, while one of my daughters has put in an order, too! If anyone else is interested, I’ve written the pattern in German for my friend but could easily do it in English, as well.

We’ve had to go looking for sunshine quite often just lately, as our area is too close to the river and the autumn fog sometimes never lifts for several days. Conveniently, the vet is at a slightly higher altitude and so following our regular visits over the last few weeks (Alina is now bandage-free and doing fine, thankyou, except for speed, which continues madly on three legs!) we’ve tried to take advantage wherever possible, including a marvellous drive over the Zurich Oberland, a winding web of roads that often run along the top ridges of the hills, allowing fantastically glowing and golden panorama views over multiple layers of smoky hills to the distant mountains – absolutely breathtaking!

(sorry, I stole this photo from a hiking group…!)

We also found sunshine on a chilly, wintery Saturday pre-Christmas market lull in a surprisingly quiet Lindau (Bavaria, Germany), at the other end of Lake Constance, as the fog parted half-way across the lake to unexpected brilliance

It really does look like that, the famous entrance to the harbour. The original Lindau is a small island tucked into the bottom corner of Lake Constance, reached either by a single bridge or by train (we can’t for the life of us imagine what they were thinking when they decided to use half of a mediaeval town on a tiny island for a large railway station, including building a railway bridge out to it… there isn’t that much cargo to be had from the lake! Political? Probably!). Because of its age and some very narrow streets, there is hardly any traffic, so it’s a charming place to visit, easy to walk all around and then the harbour with it’s bold entrance – we have ourselves had to resort to coming into this harbour in heavy weather when boats were packed in like sardines and the cafés steamed with sailors ducking in out of the rain in their oilskins, and it can be a godsend. That’s alongside the large pleasure boats that trundle in and out regularly throughout the season – always three long toots of the horn for those going in or out, no matter what the size of the boat.

But on the whole, it’s an introverted time of year. We have birthdays in the family, time to squeeze in some visits before other family members jet off to different places for Christmas and we can guarantee some cosy time. I’m watching my amaryllis grow – looking a little eery in the light

and now the countdown begins, with the first of the Advent candles lit 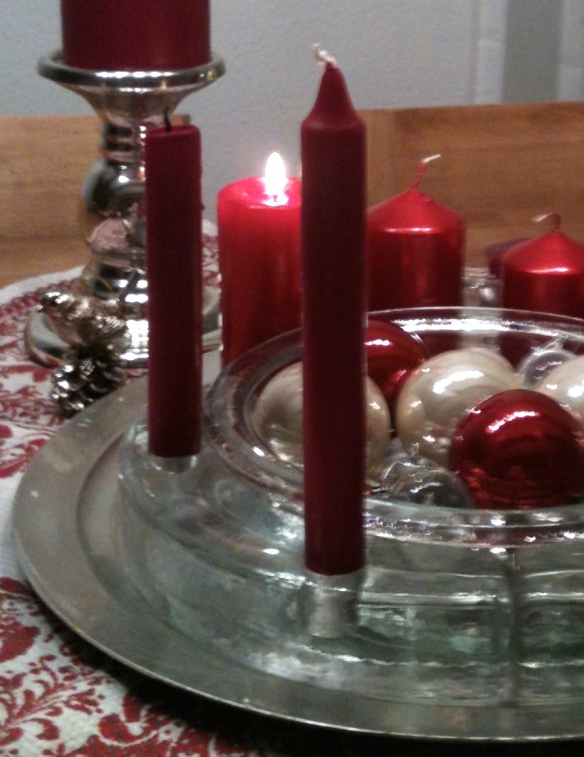 Edit: I’ve just checked up on Lindau… it was originally founded onshore, but soon moved to the island (1079) for security reasons. The harbour lion and light didn’t appear until 1856, apparently – though I still can’t see why the rail people built on the island! The name of the town means “island where lime trees grow” – pretty. There is more info on the Wikipedia sites, in various languages, for those of historical bent: it’s a busy history! http://de.wikipedia.org/wiki/Lindau_(Bodensee)#Geschichte and http://en.wikipedia.org/wiki/Lindau

So….my clever husband tells me the reason the railway was built on the island is because some train carriages used to run directly onto a train ferry (linking Friedrichshafen and Lindau on the German side to Romanshorn on the Swiss shore) and the water would have been too shallow for a ferry to get close enough to the mainland. It would also have been exhorbitant to build a strong enough jetty out into deeper water, which would have been subject to wind and weather to a greater extent than on the island.

At least, that’s the theory!