A question that pops up now and again tries to divide those of us who lived through the 60’s according to whether you were a Beatles fan or a Rolling Stones fan. Since I was still rather small in those days, I became, vicariouly through my father, more of a Beatles fan. I learnt to read fluently by following the printed song texts on the White Album…

One thing I had actually never seen, though, was The Magical Mystery Tour. This was shown on Boxing Day 1967 on British television and caused something of a sensation. Although I know all the songs and had come into possession of a booklet with a couple of 45 rpm singles featuring them from my uncle, we didn’t live in Britain in 1967 – and anyway, I was only 3! A recent documentary celebrating the 50 year anniversary inspired me to actually go and watch the one-hour classic (found online though not on the ubiquitous YouTube!) and a delightful hour it was.

So you think the British have a “bonkers” sense of humour?! Indeed they do – if you love Monty Python, revere Top Gear (and enjoy the Blues Brothers!), you could well appreciate this crazy spectacle. In the documentary, it was interesting to hear how teenagers at the time did or did not understand what they were watching, and also to hear the reactions of their parents or the older generations, which varied from switching off to humphing about “utter nonsense” to recognition and acceptance that this was simply what the younger generation had creatively made.
BBC Four Arena – Magical Mystery Tour Revisited (available on BBCiPlayer but not online, unfortunately)
Another documentary link: https://www.youtube.com/watch?v=ymmcyH2Zscw (lots of outtakes at the end!)
Personally, I was very much struck by the context. 1967 – 50 years ago. Society was different, people thought differently, had a different background, often with wartime a not-so-distant memory. Television was still fairly new for anyone over 18, and so hadn’t defined their lives as much as it later came to do. Radio and theatre were far more familiar and appearances didn’t count for quite so much as having a good time.

With all this in mind, I was both touched and amused by the madness that is the Magical Mystery Tour. My grandparents, who reached their 60s about 10 years later, still went on many coach tours and while probably not quite as lively as the group in the film, I’m sure they enjoyed a sing-song on the way home. Perhaps that’s why the film worked and was even accepted for Christmas TV in 1967 – there are enough elements in it which were perfectly normal to the bulk of 1960s society. Oh we do like to be beside the seaside and a nice cup of tea (or bottle of beer!), ballroom dancing (Granny did a bit of that – and before Strictly on TV there was simply, Come Dancing…!) and a good old family get-together that brought together all ages and all sorts, just like the film. Hours spent looking out of a coach window watching scenery or motorway go by, stops for a trip to the loo, squabbles… it was all just a part of it. 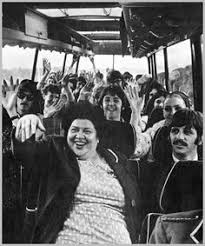 What I can’t really imagine is that the 1967 showing was in black and white…!!

Another point that pops up is that of moral values. Listen to how people talk to each other, appreciate that the little girl Nichola sits on (stranger alarm!) John Lennon’s knee and enjoys the attention without any ulterior (danger!!) motive, everyone is just having a good time. There is nothing “PC” (politically correct) about most of what goes on – the little man is not ridiculed and nor are the “midget wrestlers”, but could this film have been made in 2017? I rather think not. The men go to a strip show (shock-horror-feminist-gasp) while the ladies swoon over the elegant white-suited Beatles and the ballroom dancing dresses in true show-style (a great finale!), while the marathon no doubt suffered no limitations from ‘health and safety’…

To me, it was a feel-good film where everyone just had a good time and extremely funny. On the one hand, I can see how very 1967 it is, to some extent a heightened normality, and yet on the other, so very counter-culture and shocking. Fascinating stuff. But yes, controversial both in 1967 and 2017. How far have we come? Or not?!

PS and what about Paul McCartney’s wonderful Fair-Isle jerkin?!

1 thought on “In Context”