I have talked here before about Advent, that run up to Christmas over 24 days that is so well known in German-speaking countries, as well as elsewhere. It seems to have had something of a renaissance – perhaps just something else to market in our consumerist world – and I admit that it’s something I look forward to. Possibly because my birthday is, and has always been (!) on the first day of Advent! Since I was a child, I have had Advent calendars (most frequently with or without chocolate but this year, TWO, full of different tea varieties!) and Advent candles and we have, I think, almost always had an Advent wreath with four candles on it, lighting one more each Sunday before Christmas, whether we celebrated the German, or later, Swiss Christmas Eve or English Christmas Day. Candles have always been a part of it, that lovely warm glowing light emanating with the particular scent when the lights are low and the weather outside is atrocious…the epitome of hygge, I suppose.

I don’t remember there being much in the way of electric lights around my childhood Christmasses. Perhaps they weren’t so common in Europe in the 1970s/80s. Even when our children were younger, we never had electric lights, but in the last 10 or 15 years, they have become more and more popular. Whereas candlelight lit up the lametta draped on the wondrous silver or gold Christmas Eve tree (in Germany and Switzerland), it twinkled on colourful tinsel on the artificial tree in England, but that all seems passé now. More and more houses and gardens feature electric light decorations in some form and the advent of the LED has meant that it’s a cheap and cheerful form of seasonal decoration trend. Fortunately, most people in my part of the world seem to prefer plain white and non-blinking, and I myself am partial to pretty little lights – all the year round, if I’m honest! – but almost only indoors, and hopefully tasteful!

The two pocket watches belonged to my great-grandparents and have a history of their own!

These days, no self-respecting town or city can get away without a light show of some kind. Even the local villages in my area proudly attach some kind of lights to each lamppost along the main thoroughfare(s), one has stars, the next candle shapes or snowflakes or… I’ve often seen cranes on a building site with electric stars in addition to the red warning light for planes. A few years ago, shortly after we moved to the little washhouse, our town lights extended to just in front of our house. Mid-November a truck pulls up patiently at each lamppost from the roundabout until opposite our house and deposits a smallish spray of lights and a snowflake that is quickly and efficiently fixed up on high. From the first Advent weekend until Epiphany (January 6th), the lights come on each evening, come rain, snow or wind, and put a gentle glow over the plain, tarmac street. Mid-January, the patient truck pulls up again to dismantle everything until next year.

If you follow the decorations along, you will see more Advent lights, this time in the old schoolhouse windows, where the children decorate Advent windows ready for their turn, as 24 buildings, mostly private homes, pick a day in December to star in the Advent window show. If you hang or place a jug near the entrance, it means you’re willing to host light-goers for a drink and/or snack, maybe some mulled wine or hot chocolate. By the 24th it’s well worth a walk around this part of town to see all the windows and what people came up with this time round! All kinds of winter and Christmas scenes will be your reward.

Next come my very favourite lights – a large tree just after the bridge looks as if someone has daintily dropped flower lights into its winter branches. It’s such a delicate rendering of lights and I enjoy it almost daily as I drive by. Or are they snowflakes? You tell me.

After a stroll along the river – where there are no lights, but the water captures and reflects plenty of twinkles as it flows along behind the railway station – you will get to one of the older parts of town, the first part of town to have escaped the old town walls. From here throughout the centre of the old town, our council has invested in a whole new light show. Instead of strings of lights in various shapes, there are projections onto the most prominent buildings, some taking the building’s features into consideration, others just glad of a blank space. And they tell the Christmas story! 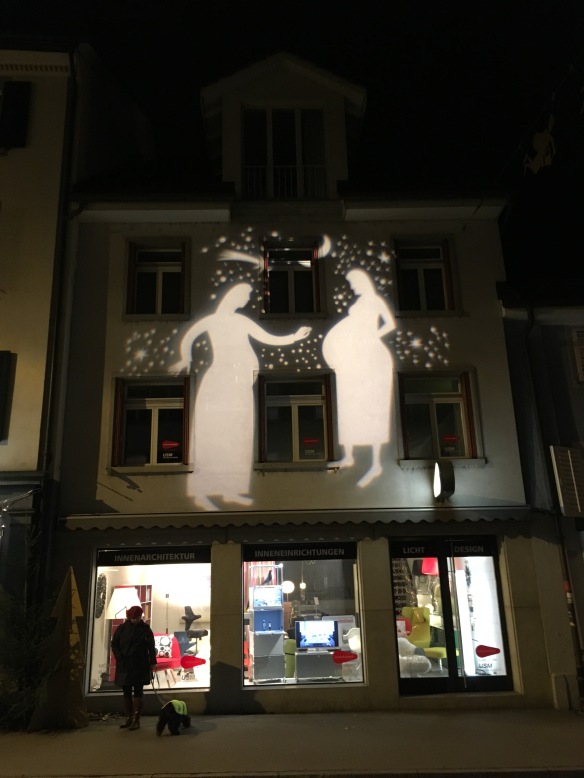 The style is consistent throughout and also with that of golden figures strung across the mostly pedestrian streets of the town’s core. These are not electrified or lit up, they shine only with the glow from the projections or the individual shop lights, characters made famous by the Christmas story, camels and sheep, shepherds and kings. 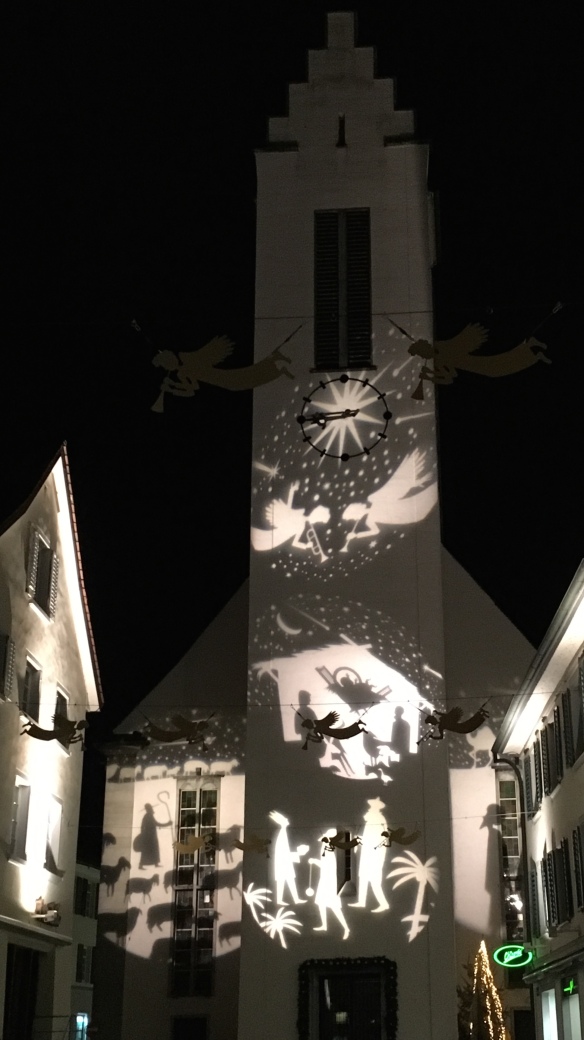 Our little town is not a tourist attraction, it has no particular notoriety. But it does have some attractive old buildings, like most places in Switzerland. It is a town of only about 25000 inhabitants but with a great infrastructure and a loyal population which enjoys buying locally. Again, like many towns here, it has both a Catholic church and a Protestant church, a town hall, administrative buildings. It has an elegant old railway station but also supermodern commercial premises next to it. Some 19th century buildings have attractive bay windows, some of the houses have a specific connection to people or events. The projections are on all kinds of facade, regardless of age, and unite them. Sometimes also with the more familiar strings of electric lights! 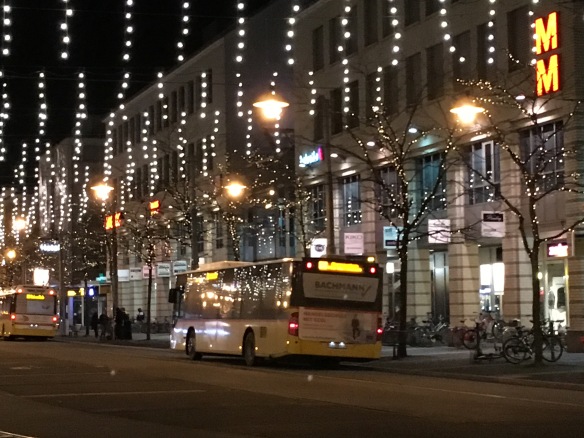 And lastly, what was conceived as an elegant shopping street with a huge post office building at the top end, a smart confectionary and café halfway down and a representative bank building at the other end regains its poise with a row of young trees garlanded in strands of stars that glow modestly across the way as our little tramway train passes by… 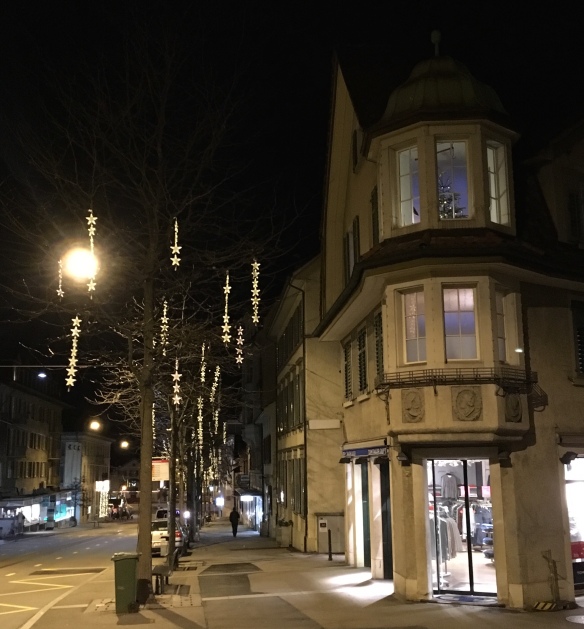 (A small reminder: the Twelve Days of Christmas traditionally begin on Christmas Day and run on to Epiphany. This is the actual feast of Christmas (Advent was generally a fast in anticipation of the great day)… a really good excuse not to consider Christmas “over” after the 25th December, concentrating on the coming year, but to keep the festivities going! Take note, young bloggers and vloggers – I was bemused to see “12 days of Christmas” featured during Advent! :o)

PS The city of Geneva is so international, it’s hardly Swiss – and yet, look at its lights! 😉

15 thoughts on “Season of lights”